Mr House presented our latest award winners with their certificates on Friday.

The Jack Petchey Achievement Award scheme is a reward and recognition initiative which enables schools and youth organisations to celebrate the achievements of their young people as well as receive additional funding. Mr House presented our latest award winners, who had been nominated by their peers, with their badges and certificates on Friday. They each receive £250 for the school and decide how they would like the money to be spent.

Keeleigh volunteers at a local cub group every Thursday evening. During this time, she sets games and activities to help the group develop their skills. There are approximately 34 students in the group, three of which have special needs.

Erin has been nominated for her involvement in three different charities. This month, Erin has competed in and won the national Stonewall competition for best LGBT+ poster, which has been sent out and used in over 200 schools nationally to raise awareness and support students in the LGBT+ community. Erin also helped publicise and organise the LGBT+ and Donkey Sanctuaries bake and doughnut sales at Greenshaw last term. As part of her work on the Greenshaw student council she has also initiated charity work for the Sutton Night Watch, which is a locally based charity supporting homeless people; which led to the sixth form to collect donations for the charity over the Christmas period.

These Year 13 students, without help from staff decided to organise a community quiz night for staff, students and families in aid of Crisis.  It was well-run, well-written and lots of fun.  In the midst of A level pressures they all excelled and were able to prioritise the needs of vulnerable people.  A total of £179 was raised, enabling a number of homeless people to get support at Christmas. 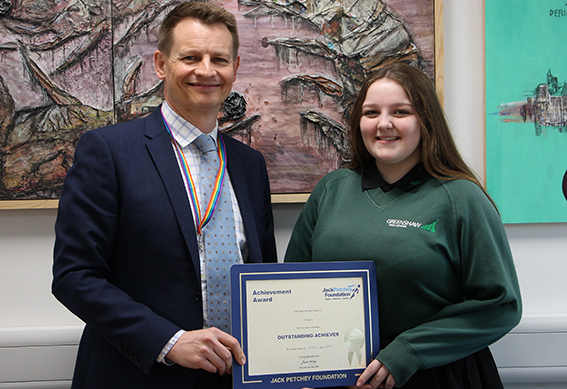