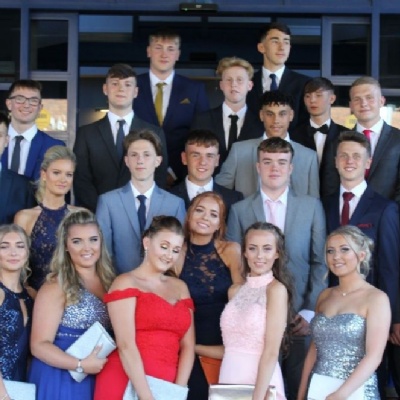 On Friday 29th June, an array of Year 11 stars gathered for the annual rite of passage that will see them embark on the start of their adult lives, the Year 11 Prom had come to town at the Holiday Inn, Sutton. Along with staff dressed in their finery, it promised to be a spectacular evening.

The students arrived like film stars flocking to the Oscar’s and Mr House opened the proceedings by warmly welcoming the students and congratulating them on their journey. During the evening students found themselves to be part of their own Greenshaw High Soap Opera awards presented by Ms Radwan and Mr Jones. Categories included the ‘it wasn’t me’ and ‘drama queen’ awards, as well as the ‘poor outcomes with spherical objects’ award!

Mr Kidd received an engraved golden boot and a signed football in acknowledgment of his lunchtime commitment to the Year 11 boy’s football. The supporting cast of tutors to the stars were also recognised and representatives from the tutor groups presented each one with a gift.

The presentations were closed by Mr House, who had the honour of announcing the much-anticipated outcome of the first ever Greenshaw High School Prom King and Queen. Students had voted and Jude and Ellen were crowned as the year group royalty.

The evening then continued with dancing and much photograph taking, not only by the students themselves, but the school photography team as well as the obligatory photo booth.

Although saying goodbye can be bitter sweet, it was an evening full of fun and laughter which embodied the Greenshaw ethos of a collegiate school which works and celebrates together. I am certain the Year 11 Prom – class of 2018 – will remain in all our hearts and minds for a lifetime.